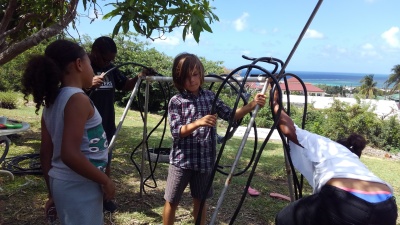 Category-5 Hurricanes Maria and Irma changed all our lives when they both devastated the Virgin Islands within twelve days apart. Although the Hurricanes ravaged the islands, they emerged a great sense of resilience within the people. St. Croix has proven its resiliency by holding its Forty Seventh Annual Agricultural and Food Fair regardless of the Category-5 devastation on the agricultural industry and infrastructures leaving people vulnerable just eight months prior. This year’s  Fair theme was, “V.I. Agriculture Strong:  Rebound, Rebuild, Regrow.”

Our school participated in the Annual Farm Animal Frenzy Agricultural Fair Competition. The children had to create an animal structure using their choice of recycled, reduced, reused or repurposed (RRRR) hurricane debris, which illustrated this year’s Fair theme.  The children chose to create a llama as their animal structure because they “have never seen a llama in the Agricultural Fair competition before,” and they liked the originality of the idea.

They used alliteration to name their llama: Lawrence Lloyd. The children conceptualized a llama made out of Hurricane Irma and Maria debris – a theme throughout our campus this year. For example, the neck, spine and legs were made using metal poles collected from dumps or families’ yards. Metal wires found after the hurricane were used to tie and keep parts of the head, body, and legs together.

The children enjoyed bending the wires, using pliers, twisting and experimenting with different tools and materials in order to create a stable, life-sized structure. They then selected a range of recycled and reused materials to create the details on the llama’s body. 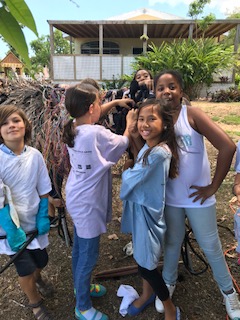 In order to use the wires, the children spent many hours degreasing, scrubbing, and wiping rags across the wires. Finally, since the llama is a native animal of Peru, the children decided to decorate the llama to include representations of the Peruvian custom: the colorful pompoms were made from yarn scraps, while the harness and necklaces were made from the colorful WAPA wires. The children’s only disappointment was that they were unable to ride the llama.

How The Animal Structure Entries Were Judged:

The judging committee asked that at least three children be present to answer questions about the construction of the animal structure. The children spoke fluently and with great excitement with the judges.

The children’s hard work paid off:

THEY WON THE CHALLENGE!!!

Congratulations to all the Upper and Lower Elementary students on a successful project. A special recognition is given to the two parents who volunteered to guide the children during this project. Kudos to Niarus Walker and Christina McPherson for working diligently with the children for several weeks to complete the challenge. The entire SCM community is grateful for their support and participation.

Click here to enter your email and customize your subscription!